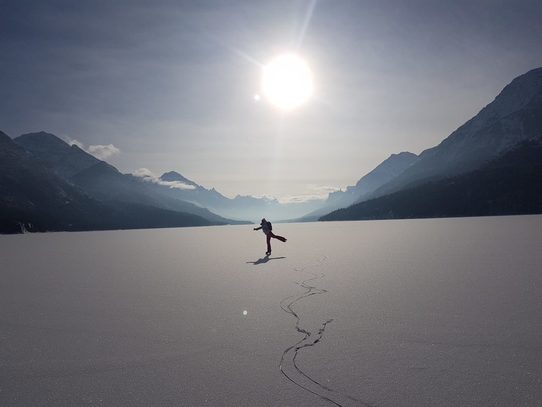 I always say misadventures make the most memorable adventures; and in the case of this past weekend, helped me find a new adventure.

Ryan and I had a cross country ski day in Waterton planned for weeks.

We spent the holidays apart and needed some quality time that didn’t consist of snacks and Netflix.

Despite the forecast saying a high of -18, I insisted we still go out and once we started moving the cold wouldn’t bother us.

The entire drive to Waterton was super foggy but we kept checking the Waterton webcam and it showed sunny skies. We finally got to the Waterton lakes Lodge and went in to rent our gear. We picked out our boots, poles, and skis and headed to the front desk to fill out the rental agreement form.

I went to pull out my credit card and realized my wallet wasn’t in my purse. The joys of being a student, you are constantly shifting your wallet from backpack to purse and back.

I looked at Ryan and said “I don’t have my wallet, would you go get yours?” To which he replied, “I didn’t bring my wallet.” There we stood, without any money or debit cards.

Ryan said “So we drove an hour and neither of us had our wallets?”

The man working front desk laughed but I didn’t find it funny.

I stormed to my car and was so pissed at myself and at Ryan for not checking for something like that on the way. I also scolded Ryan because he never brings his wallet, he always counts on me and so the one time I forget we’re screwed.

Not only that, we had no money to buy lunch and barely enough gas to make it home.

Ryan was very sweet and tried to salvage the day by saying we could walk around town a little bit before going home. Anyone who knows me knows that I don’t like “downgrading” my adventures and I headed to the lake sulking and upset.

But then we went to the lake and I saw something my eyes had never seen before - a completely frozen Waterton Lake. 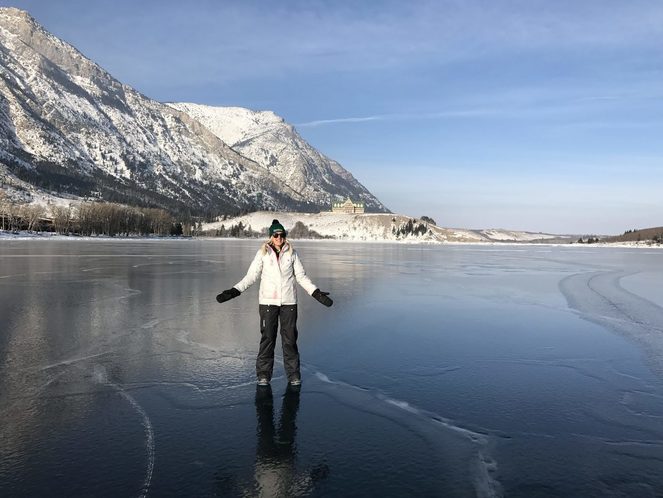 When I first moved to Alberta in 2010 I heard locals say once in a while the lake would freeze over but I had yet to see it.

​The ice was perfectly smooth and black and there were people skating around on it.

I turned to Ryan and said “We HAVE to come back tomorrow and ice skate on this lake! Who knows how long the ice will last?” Ryan doesn’t have skates and didn’t seem very enthusiastic about the idea so I whipped out my phone and messaged my friend Samara who said “Yes” immediately.

Knowing that I was going to have an awesome adventure the next day helped me enjoy our day a little more. We played around on the lake for a while, hit up Cameron Falls, and hit Driftwood Beach.

I was so excited I woke up super early and had to wait for hours for the agreed upon time.

I picked up Samara and her enthusiasm matched mine. She is like me and likes doing crazy things so we started talking about skating down to Crypt Landing.

When we pulled into town I realized that it had snowed a little the night before and the black, glassy ice was covered in a light dusting of white.

I was disappointed because I was really looking forward to seeing Samara’s face when she saw the ice.

We went down to see how heavy and deep the snow was and it was only a light, small dusting so we laced up and started skating around. 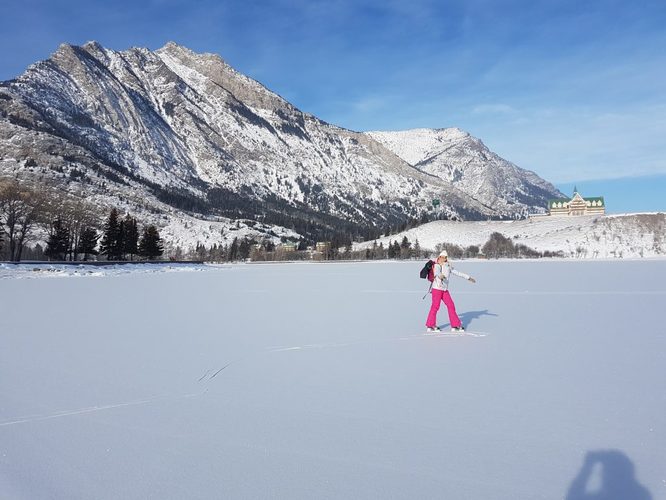 It was such a cool experience because there wasn’t anyone else out.

I think the -21C temperature had something to do with that.

We skated around until we warmed up and got the hang of it and then we talked about crossing the lake to get to Crypt Landing.

I am always safe with my crazy adventures and had talked to Parks beforehand. She said there hadn’t been any thin ice warnings, but we proceeded with caution.

We were a little more than half way when the ice groaned and I saw water move beneath the ice. It might have been fine, but we both decided better to be safe than sorry (drowning under ice is my biggest fear) and we stuck to the shoreline of the lake and skated around for almost two hours!

If the ice is still thick enough, we talked about coming back and parking on the other side of bay near the Prince of Wales and crossing the lake at the little peninsula into Middle Waterton Lake. Then we could hug the shoreline all the way to Crypt.

So you see, one adventure didn’t happen, but another one did because of it!

​And I have plans with a group of girlfriends to go cross-country skiing this weekend, so hopefully that works out. And you better believe I won’t be forgetting my wallet next time!